The Other Hammond House

Occasionally, the Hammond-Harwood House becomes confused with another Hammond house in Maryland, the Benson-Hammond House. It is easy to see why this happens, as both have hyphenated names containing the surname Hammond. However, these are two distinct houses in different locations that happen to be linked together by a name.

The Hammond-Harwood House was constructed for Matthias Hammond (1748-1786), a wealthy landowner who owned several tobacco plantations and served in the Maryland legislature. In 1774, Matthias hired joiner and architect William Buckland to erect an Anglo-Palladian brick mansion in downtown Annapolis. Buckland embraced classical design elements reminiscent of ancient Greece and Rome, which can be seen in details throughout the house. The pediment with its denticular molding and the front door encased with Ionic columns harken back to the great buildings of that classical era. The House consists of a five-part main block with wings on either side connected by hyphens, and its design has remained unaltered since its original construction. The Hammond-Harwood House was designed to be a place that made left an impression, a place that symbolized the wealth and status of its owner. 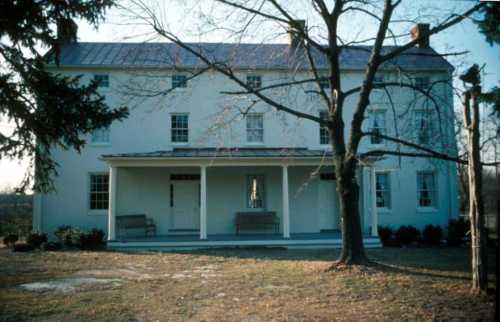 The Benson-Hammond House in Linthicum, Maryland

The Benson-Hammond House, on the other hand, is a simpler home. Located in Linthicum Heights, Maryland, not far from the Baltimore-Washington International Airport, it is a 19th-century farmhouse. Between 1809 and 1815 Thomas Benson acquired three tracts of land and, according to family tradition, constructed a log cabin. Eventually, circa 1820 or 1830, the Bensons built a two-story brick farmhouse. Sometime after the Civil War, the house was lengthened and a half-story was added. This addition was done in the architectural style known as Greek Revival. By 1854, Thomas had conveyed ownership of the house and land to his son Joseph. Joseph died in 1882 and indicated in his will that the house should be sold. In 1887, John T. and Rezin H. Hammond purchased the house for $13,600.

So, how exactly is Matthias Hammond connected to John T. and Rezin H. Hammond? Well, that is a great question, and one that took some digging into genealogical records to answer. Bear with me as I try my best to connect the dots with as little confusion as possible. Rezin Howard Hammond is Matthias Hammond’s great-great-great nephew. Matthias had a brother named Rezin, who had a son named Andrew, who had a son named Rezin, who had a son named John Thomas, who is the father of Rezin Howard Hammond and the “John T.” referred to in the previous paragraph. So, the two Hammond houses are connected, but not as directly as confused visitors often think.

Filed under Architecture, From the Intern Desk, Hammond, History